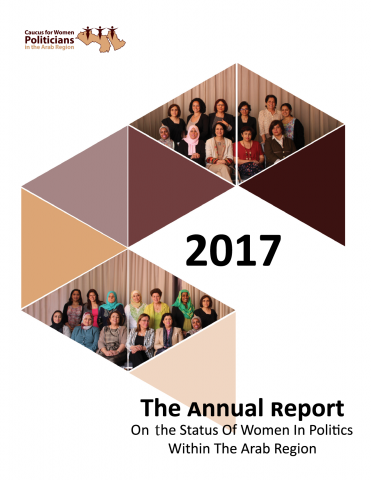 During 2016, there have been several changes that affected the path to women’s political empowerment in the Arab region. These changes included passing several laws and legislations that positively, or negatively, impacted the political role of women, in addition to the fact that the Arab region also witnessed several legislative elections in some countries. This calls for analysing these elections while not only taking into consideration their results but also looking at the legal, political and security climate surrounding the electoral process. These factors have a direct impact on the status of women in the electoral process and on election results. Such impact extends to the future of the political role for women in the Arab countries. This report includes four chapters: the first one is about the status of women within constitutions and election laws. The second chapter covers the parliamentary elections in Morocco as an example for the elections where a delegation of the Caucus for Women Politicians in the Arab Region took part in its monitoring. The third chapter tackles the parliamentary elections in Jordan and the fourth and last one discusses elections in Kuwait, both of which were held in 2016.

A Conceptual Introduction: The Research Methodology for the Annual Report on the Status of Women and Politics in Arab Countries

The report adopts a two-sided methodology, practical and theoretical. The report’s theoretical side involves a historical, analytical, comparative and descriptive approach and it is based on collecting primary data from diverse sources, including policy documents and reports from states, political parties and commissions such as the national commissions for elections in the countries covered by the report. The secondary sources include working papers, journals, academic research papers and reports of women’s organisations in some countries. The practical side is based on inductive reasoning: that is the process of observing phenomena and collecting data about them to reach general principles and overarching connections, and a bottom-up reasoning that relies on the transfer of the case studies’ experiences that are only partial to the general guidelines, which means moving from the particulars to a general rule. Hence, the outcomes of inductive reasoning are more generalized than its leads and it takes place through observation and trial and the different followed research techniques. The credibility measure of this form of reasoning is based on the actual agreement of the outcomes reached with reality. The caucus members took part in the inductive reasoning process, through sharing their experiences in their countries and their knowledge about the democratic transitions, adding to the role of feminist leaderships, civil society actors and feminist groups in attaining rights and entitlements, whether constitutional or legal. We specifically point out parliamentary election laws, local elections whether central or on district levels and representation within parliaments of several countries. Regional consultation meetings were held for the Caucus for Women Politicians in the Arab Region, with its members taking part in them; these members are also feminist political leaderships in their countries which include Egypt, Tunisia, Algeria, Morocco, Jordan, Sudan, Libya, Yemen, Lebanon, Saudi Arabia, Iraq and Kuwait. The caucus members are characterized by their engagement with the political arena and their active participation in the democratic mobilization in their countries, as well as their persistent efforts to keep women’s issues in politics on their states’ agendas. The caucus members took part in following the parliamentary elections of the Moroccan Kingdom, in partnership with the Arab Network for the Democracy of Elections during the periods preceding and following the elections. Moreover, one of the caucus members ran in these elections and won a seat which added value to the report through her real life experience and the active role of the Caucus members regarding these elections.

The report highlights the study and analysis of women’s participation in politics within the Arab Region and finding out the status of women in politics within the constitutions and laws that are related to participating in the political field, during the period from 2011 till 2016. The report also sheds light on the role of feminist groups and leaderships in constitutional and legal amendments and evaluating the role of women in them, in addition to pinpointing the obstacles and challenges that they encounter until now; these encompass the patriarchal, dictatorial ruling regime and the misogynistic culture ingrained in the consciousness of our Arab nations that still deny women their representation in decision making and their presence in legislative, executive and supervisory bodies, despite their unrelenting participation in the democratic mobilization and struggle. They consistently demand the commitment of the states in the Arab Region to taking measures to eliminate discrimination against women and combating gender-based violence within the private and public spheres.